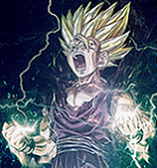 Age : 33
Location : Anywhere, You Just Don't Know Until You See Me
Hello everyone. Loto Drandel here with another deck analysis based on the metagame. I've gone over a couple decks duing my previous month back in DAD Academy (Six Samurai and KMG (Karakuri Geargia)), so now the next deck on my list is...

Dark World
Originally debuting in Elemental Energy (back in the GX era), this deck was limited on potential due to the low number of monsters and support it had at that time; however, in the day and age where both Synchros and XYZ monsters reign (along with the release of a structure deck based around then), this deck has gone from being mediocre to ABSOLUTELY ANNOYING in its near meteoric rise as a powerful deck in its own right.

I will go over some of the components that make this deck the powerful annoyance that it is today, starting with some cards that debuted from the time of the Gates of the Underworld structure deck onwards.
First up...

You can Special Summon this card (from your Graveyard) by returning 1 face-up "Dark World" monster you control to the hand, except "Grapha, Dragon Lord of Dark World". If this card is discarded to the Graveyard by a card effect: Target 1 card your opponent controls; destroy that target, then, if this card was discarded from your hand to your Graveyard by an opponent's card effect, look at 1 random card in your opponent's hand, then, if it was a monster, you can Special Summon it to your side of the field.
In my opinion, this guy is considered the "Big Boss" of Dark World for good reason. His effect destroys a card your opponent controls if he is discarded by a card effect (your own or your opponents). If your opponent's card effect discards him, then you get an opportunity to look at 1 random card and potentially summon a monster to your side of the field (if that 1 card was a monster). With many cards in the deck that have discard effects, this guy is easy to abuse for destruction. Along with the ability to Special Summon himself from the grave by returning a Dark World monster you control to the hand, he is pretty easy to bring out to the field.

The Gates of Dark World 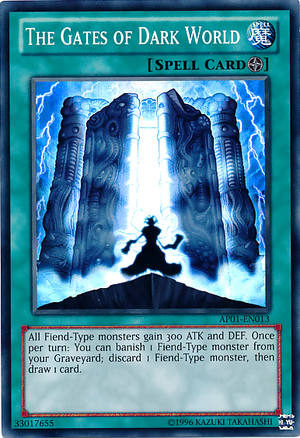 If this card is discarded to the Graveyard by a card effect: If it was discarded from your hand to your Graveyard by an opponent's card effect, you can target 1 monster in your opponent's Graveyard; add 1 "Dark World" card from your Deck to your hand, then Special Summon that target (if any) in face-up Defense Position.
This card makes for an easy search of Grapha or Gates or some other needed Dark World card to put in your hand, allowing to make those combos a little faster or set up for some big attacks. Also makes for XYZ fodder or an attacker in its own right (2000 with Gates on the field). 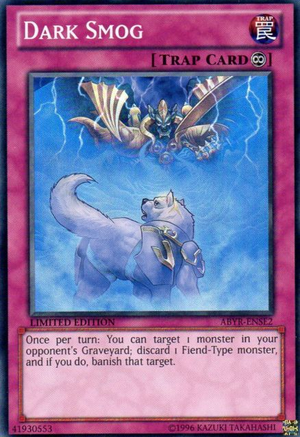 Once per turn: You can target 1 monster in your opponent's Graveyard; discard 1 Fiend-Type monster, and if you do, banish that target.
A handy little trap for banishing your opponents monsters while discarding your Dark World monsters. Also makes for fodder for Leviair (if the monsters you banish are Level 4 or lower)

Now for some old school cards that provide their uses to the deck.

Each player draws 1 card, then each player discards 1 card.
Not much to say for this card; draw and discard allows for thinning a little bit to get to your needed cards/mass dumping of Dark World monsters for effects to cause more deck thinning or destruction.

Dragged Down Into The Grave

Both players reveal their hands, discard 1 card from their opponent's hand to the Graveyard, then draw 1 card.
This card is an advanced version of sorts of Dark World Dealings, except you and your opponent reveal each other's hands and choose the card to discard from the hands; it's especially advantageous for the user when s/he is down to one card such as Grapha, Snoww or some other Dark World monster. This card can potentially wreck some decks such as Wind-Ups and maybe Mermails by discarding a vital card in the opponent's hand, while you get to have a Dark World monster discarded to take advantage of its effect(s).

Each player discards their entire hand, then draws the same number of cards they discarded.
Mass hand dump and refresh, enough said. Good way to hurt your opponent though by potentially getting rid of vital cards in their hand, but it's a double-edge sword as well as it could help them too, though it's not as likely.

Well, that's all for this deck analysis. Leave comments and feedback saying what you thought and what you would like me to include in this analysis (cards to be considered for the deck).